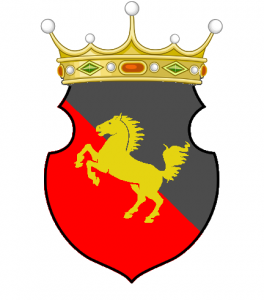 The Coat of Arms for King Xavier Santiago-Locke, King of north Mississippi. The coat of arms continues the Santiago-Locke traditions.

King Xavier is the junior son of the last Emperor of the Mississippi, Sebastian VI. Not expecting to inherit anything other than some minor titles, King Xavier made a name as a layabout, who spent his time with friends. He skirted all but the most important of responsibilities, and no one expected anything of him.

All that changed when he met Natalie Berg, second daughter to the Duke of Memphis. Though fifteen years his junior, the two took an interest to each other. Natalie, however, would not wed any layabout, even one of royal blood, and Xavier spent two years cleaning himself up. They finally wed in 2442. The next year Natalie gave birth to the twins, Leopold and Stefan.

As a changed man, Xavier had a hard time finding a place for himself in the Mississippi Empire. He lacked any education of value, and had few skills. His wife and children proved to be much more capable than he was, and he soon found himself shunted to the side, helping them as he could and gaining little for himself.

With the Commonwealth War, Xavier did what he could to bolster the home front with his wife. Even here he was a second fiddle to his wife’s charisma. When the Empire switched sides, Xavier withdrew from public life for a time, embarrassed to be left out of the decisions that his sons were involved with.

Perhaps no one was as surprised as he was to be named King of the future kingdom of North Mississippi.

Third daughter to the Duke of Memphis, Natalie Berg was born into wealth and privilege. She was also born to a family that expected more from its daughters than just marrying rich. Natalie was given education and instruction from an early age, mastering several musical instruments and fields of study.

When Natalie was first introduced to Xavier Santiago-Locke, youngest son of the Emperor, there was little expectation that she was his future wife, particularly as she was half his age. But she caught his eye. Natalie, however, was not to be joined to a drunkard and layabout, no matter his station, and she issued a number of challenges to get him to correct himself. They were married the next year.

Natalie immediately bore the twin princes, and brought to them the intellectual upbringing she had enjoyed. Her efforts as mother and princess more than made up for Xavier’s failings, and nowhere was that more apparent than their children. At sixteen, both had important roles to play in the Commonwealth War, one as an ambassador, the other as a general.

When Xavier was picked to be the King of North Mississippi, Natalie moved into her role as queen quickly. She was a constant presence by her husband’s side, acting as ambassador and mediator, keeping him in line and focused. She had Brooklyn Palace built to act as a meeting place, to entertain guests and events. In the formative years of North Mississippi, Queen Natalie did as much as anyone to boost the nation.

In 2463, Natalie became pregnant and gave birth to Princess Samantha. However, complications during pregnancy took its toll, and Natalie died of pneumonia two months later. She is buried in the Royal Crypt at the Royal River Cathedral near Snelling Castle.

Charlotte is a ‘Lady of Marie’, a distant member of the ruling family raised to be married off for diplomatic reasons. Her marriage to King Xavier of North Mississippi came with an increased trade relationship between the kingdom and the archduchy.

Nicknamed the Virgin Queen, Charlotte and Xavier are rarely together. Instead, Charlotte spends her time planning parties and social events for the ladies of North Mississippi society, and acting as a mother for Princess Samantha.

The elder son of the twins by several minutes, Leopold Augustine Vincente Santiago-Locke is the heir apparent to the throne of North Mississippi.

Under his mother’s guidance, Leopold had the finest schooling available, taking an interest in politics and diplomacy. A fine public speaker and negotiator, he was chosen by his grandfather to act as the member of the Imperial family to be present at the secret negotiations that resulted in the Empire switching sides to avoid complete destruction. He was sixteen at the time.

Leopold joined his father in North Mississippi, helping in the creation of the government. Although many of his ideas were tossed aside by other men more loyal to his father than to the kingdom, Leopold still secured a name for himself as a shrewd and talented politician.

His position put him at odds with some of the richer and influential members of the kingdom, who were less interested in building a golden kingdom than one where they could gain power and wealth. The clashes between the two factions were fierce, and Leopold was often simply outnumbered.

Eventually he was named Ambassador of the kingdom to the Margrave at Nova Scotia, where he can learn politics as a global level in preparation for his time as king.

The younger of the twins, Stefan Maximus Lorenzo Santiago-Locke is second in line for the throne of North Mississippi.

Stefan’s mother sent him and his brother to fine schools and institutions, where he took an interest in warfare and athletics. At the time of the Commonwealth War, he had a commission as a lieutenant on the Mississippi General Staff. There he learned a significant amount about warfare as the war played out.

When the Empire switched sides, Stefan secured himself command of a regiment, though he was only sixteen years old. During the campaign, he made a name for himself, ending the war as a brevet Major General and commanding the IX Corps, which advanced the furthest of any Mississippi units.

In his father’s kingdom, Stefan was tasked with keeping and growing an offensive army for use against the kingdom’s enemies. Originally a single brigade, Stefan cultured the formation into a division, corps and finally a whole army. He often clashed with the Marshal of the Army, Herschel Robinson, who was more of a sycophant than a general.

The youngest child of King Xavier and Queen Natalie, Samantha Antonia Desoto Santiago-Locke never knew her mother, who died shortly after her birth. But Queen Natalie’s desire for her daughter to be educated has been followed, both by King Xavier and his second wife, Queen Charlotte. If and when Samantha does marry, she will be well groomed for her station. And in the era of the Imperial Commonwealth, it is more than possible that she will be married to a lord far off in the world.