This page is a list of the books mentioned in the Renaissance Army series, both historical books you can get from the library, and fictional books created for the series.

Books Used by the Renaissance

The Art of War – Sun Tzu 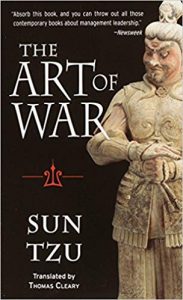 A military text dating from the 6th Century BC. Sun Tzu’s writings cover thirteen chapters of warfare. The work was studied by eastern generals for millennia, and is now used by military and business classes to teach fundamentals of conflict.

Wikipedia Page on the Art of War

Free e-books available through links at the bottom.

The Art of War on Amazon

The are many versions; I’m linking to one of the ones I have.

Fictional Books in the Series

The War of the Three Fools – David Lagrange Troy

A history book written in 2384. Troy, an exiled legislator from Michigan, wrote the book to get back at his enemies. In doing so, his work revealed how poorly run the war was on all sides, and soon the name of the book became the name of the war he wrote about.

The book covers the War of 2371-2377. Quebec fought to gain control of Detroit and possibly most of Michigan. Michigan fought to gain territory from Quebec, and in the later part invaded the Ohio Valley city states. The Mississippi Empire got involved, supplying the Ohio Valley with resources to fight Michigan. Prior to the release of his book, the governments of all three nations attempted to write the history books to explain why they won. Those efforts ceased after this book spread across Atlantic America.